Another successful conference was held March 22/23 in Birnam Hotel.  An excellent venue  – fine weather, beautiful surroundings, near to the heart of Piobaireachd history with the MacGregor’s Glenlyon and John MacIntyre’s Rannoch just up the road.  And local fiddler Neil Gow was being celebrated there the same weekend.  What a rich musical area.

The College of Piping lecture is an anticipated prelude to the conference, and Jonathon Gillespie’s talk on Piobaireachd Society luminary James Campbell, son of “Kilberry”, was well received, as was the musical contribution of Euan MacCrimmon and Jack Taylor playing the Laments for Mary MacLeod and the Earl of Antrim, the Fancy of Lachlan MacNeill, Kintarbert, and Archie Kenneth’s long Salute to James Campbell.

Saturday’s programme looked at teaching, performance, and opinions on Piobaireachd. James Beaton analysed the teaching of Bob Brown and Bob Nicol as related by pupils as part of the oral history project Noting the Tradition.  The emphasis was on singing, and there was recognition that the word “scansion” to describe phrase shaping seems to have been brought into use by Bob Brown.

Murray Henderson then talked on preparation for competition.  He held the audience spellbound for 75 minutes, and many surely left not only itching to get their practice chanters out and revive ageing fingers, but also to maybe regret not having heard the talk during their competing days.  If only they had applied the principles of the five links in Murray’s chain – technique, music, sound, teaching and mental preparation………….it all sounded to easy.

After lunch we saw preparation in practice for the set tunes demonstration.  Cameron Drummond (Patrick Og, Pass of Crieff), Michael Elder (Battle of Auldearn, the Groat), and Roddy MacLeod (Donald Gruamach, Nameless chered darieva). All played immaculately, each instrument with it’s individual sound.  It was of particular interest to hear their personal take on the tunes chosen.

The day finished with an edited compilation video “Opinions on Piobaireachd” compiled by Piper’s Persuasion master Allan Hamilton.  A real snapshot of where piobaireachd is today starting with Allan MacDonald giving his ideas on how piobaireachd has moved away from it’s origins, and finishing with the Piobaireachd Society’s take on where things are now, with much in between from David Murray, Dugald MacNeill, Ian Duncan, Stuart Samson, Andrew Wright, Jack Taylor and Norman Mathieson.

The dinner is always enjoyed, not only for the food and camaradarie, but for the piping.  Archie Drennan, aged 15,recipient of last year’s Piobaireachd Society bursary of a week’s tuition at the College of Piping with Willie Morrison, played MacLeod’s Salute with confidence and style to whet appetites.  Afterwards the highlight was 86 year old Tom Graham from Liverpool giving an excellent rendition of Ronald MacDonald of Morar.  Piobaireachd is a lifetime study indeed.  Others who played were John Shone, fully recovered from his bagpipe-induced illness, in great form with Clan Campbell’s Gathering and Barnaby Brown on triple pipe with an adaptation of The Desperate Battle.  A unique sound, and impressive circular blowing.  Then we had MacCrimmon’s Sweetheart (Alastair Lennox), Cabar Feidh Gu Brath (Walter Gray), Old Woman’s Lullaby (Ann Lore) and Stuart Samson’s beautiful composition Land of the Bens Glens and Heroes played on an immaculate pipe by Bill Wotherspoon.  Musicianship was to the fore in all performances, a delight to hear.

On Sunday morning Barnaby Brown spoke of why there are different settings of tunes. He explained that original texts and manuscripts anywhere should not necessarily be seen as “the holy grail”. They are only a starting point, with change and development being an expected norm.  He had the audience singing along to learn that “irregularity” can be meant and attractive, and he talked of the “deliberate” and “unconscious” things that happen with time to change the music.

At the AGM the health of the Society was confirmed, with currently over 600 members. Membership fees will be unchanged.  Donations to the Northern Meeting, Argyllshire Gathering, Bratach Gorm will be increased.  Donations to the College of Piping and the Army School of Piping continue. It was decided to make a donation to Piping Centre to sponsor the upcoming Clasp Winner’s recital, and to make an equal donation to next year’s College of Piping Lecture.  Financial assistance will also be given to Roderick Cannon’s upcoming book on the Gesto Canntaireachd.  The appointment of Peter McCalister to the Music Committee was announced, and the AGM approved Malcolm Macrae’s  reappointment to the music committee.  A search facility and “i-compatability” will be added to the website, and books 1-8 will be made available electronically, with links to sources and sound files.  The current executive was re-elected by acclamation.

The full proceedings will be available in due course.  And here are some of the happy delegates 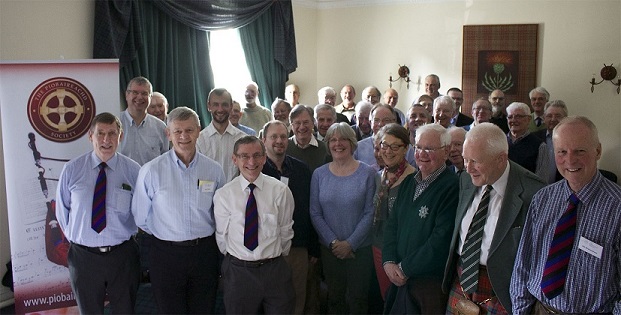