The 23rd annual Archie Kenneth Quaich competition for amateur piobaireachd players was held in the Royal Scottish Pipers’ Society rooms in Edinburgh on Saturday 7 March.   The competition is sponsored by the Piobaireachd Society.   The Archie Kenneth Quaich was won, for the third time, by Tom Peterkin from Edinburgh, who played the Lament for Captain MacDougall.   The full list of  prize winners and their tunes were as follows:

The judges were Colin MacLellan and Jenny Hazzard and the prizes were presented by Andrew Wright, Honorary President of The Piobaireachd Society.   Dugald MacNeill once again took on the arduous task of steward and announcer and kept things moving along smoothly all day. 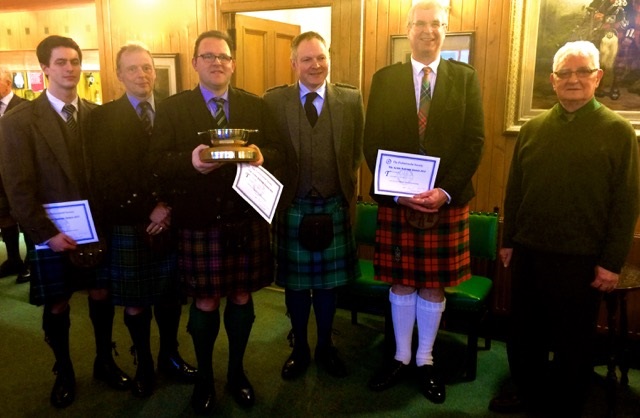 Colin and Jenny provided written critiques and were happy to give direct feedback after the competition, a gesture much appreciated by the competitors.

On this occasion there were 27 competitors, mostly from Scotland and various parts of England and Wales.   Two competitors were from the USA and one was from Germany.   Several were making their first appearances in this competition.

Competitors submit two tunes and are advised a week in advance which has been chosen for them to play.   A wide variety of tunes was presented, including a number of modern compositions, and none were repeated.   Some excellent bagpipes were in evidence and the tunes were generally well prepared and musically performed.

Thanks are due to the Royal Scottish Pipers’ Society who once again contributed the use of their rooms and bar.   This is an ideal venue for the competition and makes for a relaxed congenial atmosphere.